I lived in Sydney for over 13 years and it is literally one of the most beautiful places on Earth. This past 24 hours have been such a nightmare for all Australians, particularly those caught up in this act of violence and their families and friends.

One of the great things about Australia is that OUR Media refused to give this nut-bag a voice by showing his rants and demands live. I am so proud of them.

Whilst this was terrorism, I don’t believe it can be tagged with the rest of the ISIL Violence, although I am sure they will want to take credit.

From other media reports below information.

Two hostages and gunman Man Haron Monis have died in a horrific end to yesterday’s 16-hour siege at Martin Place in Sydney.

Monis took 17 hostages inside the Lindt Café at 9.45am on Monday morning and held them until 2am on Tuesday.

Five hostages escaped from the building between 4pm and 5pm on Monday, and another five escaped in the early hours of Tuesday, shortly before the police surrounding the café heard explosions and screams from inside the building.

When sounds of explosion and gunfire rang out, police decided to activate their emergency operation. They stormed the building and killed the gunman.

Tragically, two of the hostages also died in the early hours of Tuesday morning, with three other hostages and one police officer injured.

For the majority of Monday, the only information the world had about the gunman was that he was armed and politically motivated. Now, we know he has a long history of violence against women, sexual assault and harassment.

Monis has been known to the NSW police for seven years. He was first convicted of a crime in 2011, when he was found writing offensive letters to the families of Australian soldiers killed in Afghanistan. He was convicted of 12 counts of using a postal service in an offensive manner. He has fought his conviction ever since, losing a final bid to have his case heard by the High Court on Friday, December 12.

Since his court battle over the postal harassment began in 2011, Monis has been charged with several other offences, all of them involving violence.

In 2013, Monis was charged with being an accessory – before and after the fact – to the “brutal” murder of his ex-wife, Noleen Hayson Pal. Monis and his current partner, Amirah Droudis, were accused of planning and committing the murder, in which Droudis stabbed Pal eighteen times and set her body on fire.

Monis and ex-wife Pal were embroiled in a custody battle at the time of the murder. The murder was committed on April 21, 2013.

In December of 2013, Monis and Droudis both applied for bail. After a three-hour bail hearing, the judge granted bail to both offenders. The judge said he did so because he considered neither Monis nor Droudis to be a threat to public safety. He said the only threat they posed was to the deceased. Wonder how that judge feels today and if he thinks he bears at least SOME responsibility for yesterdays horrific events. In my mind he should.

The next month, in January of 2014, a woman went to the police with an accusation that Monis had sexually assaulted her during “spiritual healing” sessions. Monis was arrested and charged for this assault in March of 2014.

Manny Conditsis, the lawyer who defended Monis against the accessory to murder charge, said that Monis’ knowledge that he was on bail for a string of very serious crimes may have led him to commit yesterday’s siege.

“Knowing he was on bail for very serious offences, knowing that while he was in custody some terrible things happened to him, I thought he may consider that he’s got nothing to lose,” he told ABC News.

“Hence participating in something as desperate and outrageous as this.”

Conditsis also said it is likely Monis was operating alone.

“This is a one-off random individual,” he said. “It’s not a concerted terrorism event or act. It’s a damaged-goods individual who’s done something outrageous.

To me the real question is not about anything to do with religion or terrorism but the continued way in which our Justice system seems to be letting the public down by continually letting these people, who the police have arrested and who are known to be be violent and crazy, back out on our streets ON BAIL.

The police do their job, and then these people are back out on the streets with nothing much to lose and figure they can get more publicity by tagging themselves behind some high profile subject like Terrorism.

We seem to keep people in jail who didn’t pay their parking fines or not paying their taxes, yet these people with histories of violence and mental disorders get out seemingly so easily.

Another great thing about Australia is that while I am sure their will be some people who will take this incident as an excuse to rally around the cause for more bigotry and hatred , the following story shows our true nature.

Any Violent attack gives rise to what happens afterwards often being worse than the act itself.

Yesterday afternoon while  the Sydney Siege was continuing. Misinformation and ‘expert views’ about what was going on were rampant. Racial and religious hate on Twitter had gone into overdrive. Fears of widespread anti-Muslim sentiment emerged.

We know the siege has since ended in tragic circumstances, with three people dead including two hostages and the gunman. Police have referred to the perpetrator as a “lone gunman”, and it’s been revealed he had a very long criminal record.

But what we also saw yesterday was a collective response to challenge the expected reaction of fear such an event is expected to have on a city, as well as what some media outlets were telling us to feel. And indeed it may have challenged the disunity these attacks are designed to instil.

It came in the form of hashtag #illridewithyou — a shared symbol of support for anyone who feared their race, religion and/or religious attire might put them at risk while getting to and from work/school/university/wherever they have to be.

Yesterday on Twitter  hashtag #illridewithyou — a shared symbol of support for anyone who feared their race, religion and/or religious attire might put them at risk while getting to and from work/school/university/wherever they have to be to me it showed True Australia. It was one of the most powerful and important thing I’ve seen on social media and while I’m am sorry it was required , I am very proud that it emerged in my Australia and has since popped up continuously in my Facebook and Twitter feeds.

The way  it started, was in response to incidents on public transport in which Muslim women felt uncomfortable on public transport. One Facebook user, Rachael Jacobs, reported that when seeing a woman sitting next to her on the train silently removing her hijab, she ran after her at the station saying ‘put it back on. I’ll walk with you’.

That inspired others to share their travel plans for getting to and from work, declaring that if you’re wearing religious attire and don’t feel safe alone, they’ll ride with you. Twitter user @sirtessa is believed to have first suggested the hashtag, #illridewithyou.

Within hours, more than 100,000 tweets had mentioned the hashtag. It was trending worldwide by early evening, behind #sydneysiege. It’s since gone on to generate media attention all over the world as a means for standing up to racism.

It countered a different image that had gone viral — that of a photo of hostages being forced to hold up a sign depicting an Islamic declaration of faith in the windows of the Lindt cafe. It defied what certain segments of the media — notably the Daily Telegraph with its special Monday afternoon edition carrying the headline ‘DEATH CULT CBD ATTACK’ along with a photo of the hostages — were encouraging us to do: cave in to the fear such attacks often hope to perpetuate.

Yesterday, social media became a hotbed of misinformation, ‘expert views’ and ill-informed assumptions about just what was occurring in Sydney’s Martin Place and why. It showed citizen journalism still has a long way to go on covering events like this.

But by late afternoon social media was proving its purpose and resilience in offering something else — hope.

No doubt plenty of cynics will question what good a hashtag can do and whether #illridewithyou made any difference at all. Nothing can change the horror of what happened and what those who went through it and will continue to go through for some time. All our hearts are with those affected by this tragedy, especially those families of the hostages killed.

But anything that comes out of such a tragedy to give people hope that violence, fear, racism, hatred and bigotry only be get the same thing, anything that is positive that possibly offers people a shared outlet to express the significance of harmony and unity is a good thing.

If it was enough to help just one person feel safe and comfortable getting to whatever they had on today, then that’s a good thing.

This has NOTHING TO DO WITH RELIGION. THIS was an ACT of VIOLENCE by an yet another dangerous violent man who was allowed to walk our streets because he had enough money to make bail. 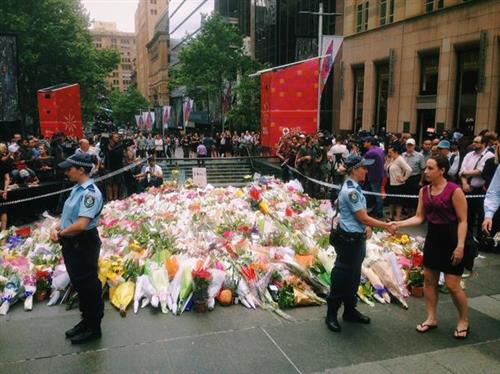 To show support for those involved it started like the left photo and has grown to the next one.

Everyone get impacted by things like this, the hope is don’t try to jump on a drama bandwagon and remember the people who were truly and in reality impacted and give all our love and support to them.